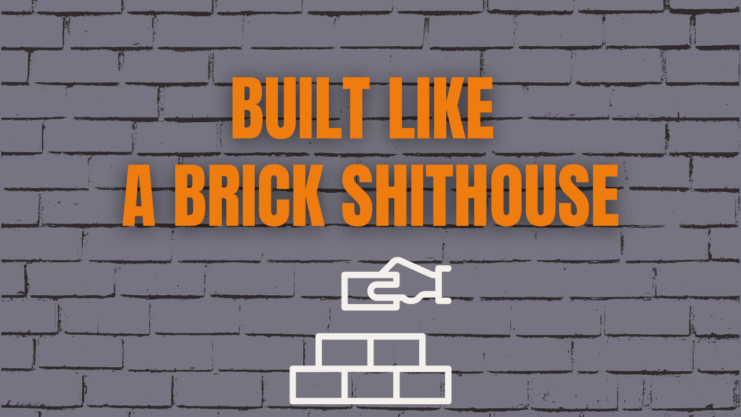 I have heard the term “brick shithouse,” but I’m not sure I’ve ever seen one — until Saturday when I encountered something close: a toilet made of brick in a restroom made of cinderblock at a park well outside Harrisburg.

It — the term — is, at least when I’ve heard it, generally used to describe someone of sturdy frame, as in: “He (she) is built like a brick shithouse.”

Urban Dictionary offers these definitions: “…very muscled and tough; impervious, unassailable … a stand-alone toilet, constructed from brick.” (Is there a rural dictionary? There should be.)

I’m not sure of the phrase’s origin, but I’d guess, when outhouses were common, most were made of flimsy wood — until someone constructed a brick one, and word spread about how sturdy it was. I’m guessing people flocked to see it, making comments like, “Now, that’s a shithouse.” Somehow, from that point, the phrase began being used to describe large and sturdy people.

Ace and I were on our way to visit some puppies for sale by an Amish breeder (story to come) when we stopped at a municipal park to stretch our legs (to use a more polite euphemism). I stepped into the bathroom to see a toilet seat perched atop what appeared to be a chimney.

I’d imagine sitting on it — a purpose I did not require — would make one feel a little like Santa Claus.

Anyway, having seen a brick shithouse, or at least something close to it, we can cross it off our list and continue our travels, staying on the lookout for hell in a handbasket, a two-dollar whore, raining cats and dogs, and lipstick on a pig.