An enterprising pet owner with a quirky sense of humor listed a wingtip shoe his dog chewed up on eBay, billing it as art.

And apparently, it was — at least in one person’s view.

That’s at least $100 more than a new pair of Cole Haan wingtips costs.

The shoe, size 11-1/2, was the work of an “emerging canine artist” named Jack, according to the listing on eBay.

“This unique presentation of a meticulously destroyed dress shoe is the first of its kind by Jack. The piece features absent toe and vamp portions of the shoe, removed through a secret chewing process, known only by the artist, with razor-like precision but requiring brute strength…

“‘Half-Chewed’ exhibits only the finest craftsmanship, as is characteristic of works by Jack. For the performance aspect of the piece, the artist ingested the dissected portion of the shoe.

In a post-modern twist on interdisciplinary performance art, there was no audience for his act of passion … The work has been interpreted by contemporary art critics as a statement on class in the wake of the American recession, a painful and complex subject for the modern American dog.”

According to the owner of the dog and seller of the shoe, Jack is a two-year-old Dalmatian mix “who started his life on the streets of rural Virginia before being detained by a county animal control facility and then adopted by his current owner, whose many possessions have become blank canvases for Jack’s defacement techniques.” 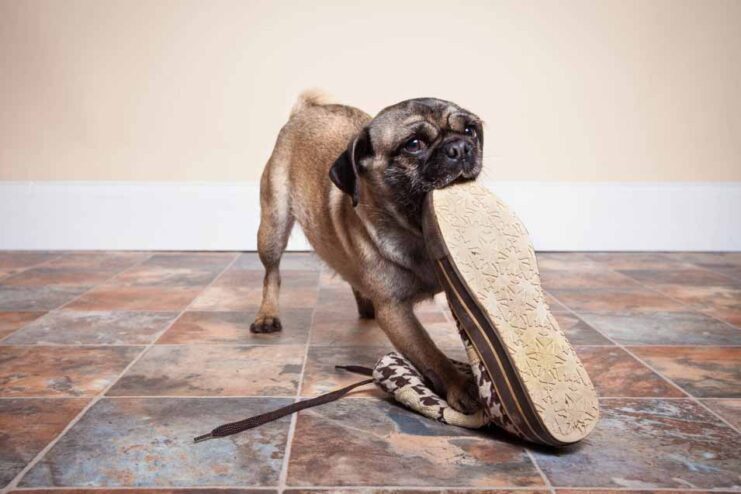 The eBay post says some of Jacks earlier works include “Berber Carpet Removal, 400-Thread-Count Sheet Shredding No. 1, A Million Pieces of a Bluetooth Headset, Exposing the Mysterious Innards of a Couch Cushion, Urinating on My Owner’s Sister’s Bed, Freeing of the Garbage from the Shackles of the Glad Bag, and of course, the well-known 400-Thread-Count Sheet Shredding No. 2.”

The seller says he will donate part of the proceeds of “Half-Chewed” to a Washington D.C. area pet rescue organization.