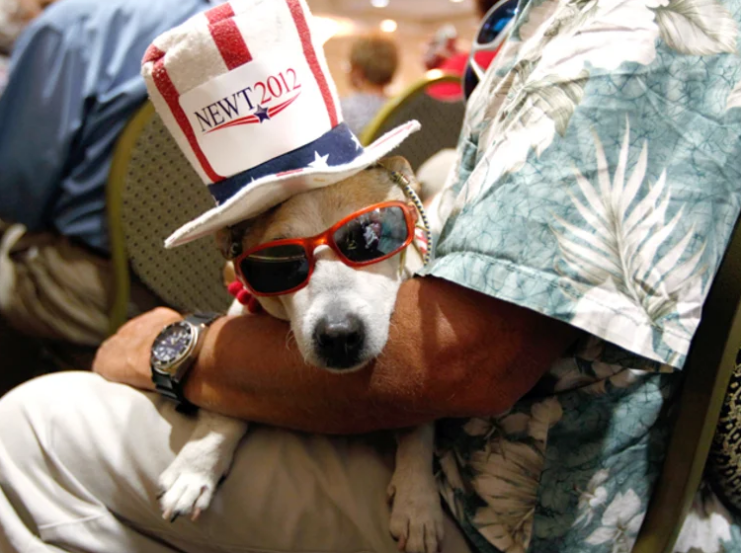 How did Ace end up next to the stripper’s pole at a gentlemen’s club in Dallas?

It’s a long story, but the main factors are these: The decline of American journalism, Newt Gingrich and dogs.

Dallas doesn’t have more strip clubs per capita than any other U.S. city, it only seems that way. In some parts of town, they are pretty hard to avoid. Most are big and glitzy, and they advertise heavily on billboards featuring scantily clad women with come hither looks.

But that’s not our excuse.

No, our connection to The Lodge — an upscale gentlemen’s club modeled after a Rocky Mountain hunting lodge — goes back about eight months when, while compiling an article for ohmidog!, we got in touch with the strip club’s public relations man, or, as his business card puts it, the club’s “Writer-in-Residence.”

Michael Precker — like me, I learned then — had devoted the bulk of his life to newspapers, serving as a Middle East correspondent for nearly seven years, covering a wide variety of stories across America and ending up, like me, as a feature writer.

Our career paths were similar, as was our dissatisfaction with the way newspapers were heading. Both of us, seeing the ships we were on seemed to be sinking — at least in terms of quality and depth — had recently jumped off. 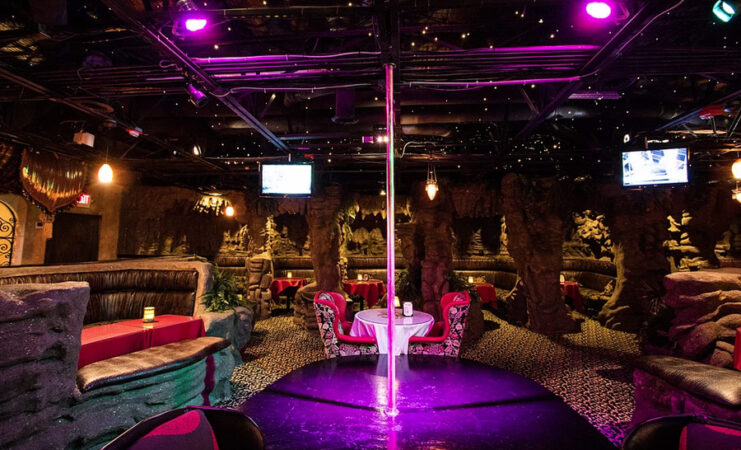 Both of us took buyouts — the captain’s way of helping staff make the decision to go overboard — he from the Dallas Morning News, me from the Baltimore Sun. I ended up writing about dogs. He, after meeting the club’s owner at a charity event, ended up in a strip club.

I got in touch with Precker — whose unusual job transition made the pages of the Wall Street Journal — last October. I had called to get some details and a photo of “Newt’s Nook,” a sanctuary for pit bulls that was being established with funds provided by the owner of the gentlemen’s club, Dawn Rizos.

Rizos had donated $5,000 to the cause — the amount being a refund of what she paid in advance to attend a private dinner in Washington to receive an “Entrepreneur of the Year” award from Newt Gingrich’s organization, American Solutions for Winning the Future.

It seems American Solutions had mistakenly bestowed the award – “in recognition of the risks you take to create jobs and stimulate the economy” — on Rizos and the Lodge, which does business under the name DCG, Inc.

They’d sent the fax to the wrong DCG — though, as Precker points out, The Lodge does stimulate the economy (among other things), and it has created a lot of jobs, not to mention helped a lot of its dancers pay for college and move into more “respectable” careers.

Realizing their flub, American Solutions rescinded the award – just a week before the ceremony Rizos had made arrangements to attend. But they did at least offer her a refund.

Rizos donated that money to an animal rescue organization seeking to build ”Newt’s Nook,” named in honor of the former speaker of the House.

But that, it seems, was neither the first nor last time that the Dallas gentlemen’s club and its staff have done their bit, and then some, for animals.

Earlier this month they held a charity car and bike wash and buffet, with all proceeds going to the Metroplex Animal Coalition. Over the years, The Lodge’s car washes have raised more than $160,000 for local animal causes.

Also this month, the club’s manager of VIP services, Sunny Hunter, and her husband Richard Hunter – adopters of a Michael Vick dog — were among those who tried to help catch a stray dog that was holding up traffic for days on the LBJ Freeway. Once the dog, nicknamed Alley, was caught, Rizos adopted it, and now brings it to work along with her Chihuahua, Pedro.

Richard Hunter, a local talk show host, caught the dog with help from comedian Hal Sparks and Operation Kindness. Hunter has also been involved in trying to capture the elusive stray that has been hanging around a Dallas church whose pastor has threatened to have it a shot.

According to Precker, who I’d agreed to look up if I ever came to town, The Lodge has a lot of dog lovers, in addition to its owner, on staff.

He and Sunny even went so far as to invite Ace for a visit. While I had lunch and an interview with Precker, Ace stayed upstairs in the office under the supervision of staff. He was more enamored with a stuffed bear — one of the numerous mounted animals in the club — than the dancers.

The next day, before business hours, Ace was allowed to climb up on a stage, check out the stripper’s pole and pose for pictures with Carrie, one of the dancers, and Vanna, who works the front desk.

Dawn Rizos, who has been honored for bringing class and flair to an industry often viewed as seedy — and here we’re talking strip clubs, not journalism — was out of town, so we didn’t get to meet her, Alley or Pedro.

But Ace and I did get to meet Michael Precker, who’s found job security in a strip club;  and the Hunter’s and their Vick dog, Mel, who found some security as well. We’ll bring you that story — unless some gentlemen’s club hires us as writer-in-residence in the interim – tomorrow.