Folklore has it that Pep, a black Lab that belonged to a Pennsylvania governor, was sent to Eastern State Penitentiary in the 1920s to serve a life sentence for killing the governor’s wife’s cat.

Folklore, as is often the case, has it wrong.

Pep apparently was guilty of nothing more than chewing up sofa cushions, and, once it was decided he lacked the proper decorum to live at the governor’s mansion, he was sent to the prison in Philadelphia by Gov. Gifford Pinchot.

That was done not so much as punishment, but to provide him a home and see if he could aid in the rehabilitation of inmates, according to the governor’s papers.

Apparently, a newspaper reporter came up with the tall tale of the dog sentenced to prison for cat murder, and a mugshot taken of Pep at the prison supplied some credence to the story.

Despite attempts to set the record straight, the myth lingers to this day. 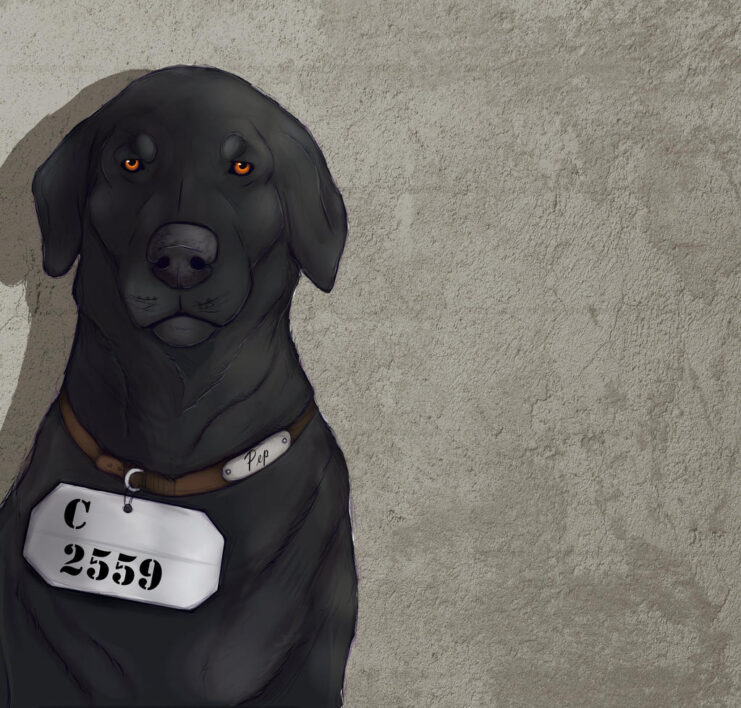 According to EasternState.org, a non-profit group that now runs a haunted house at the abandoned prison, Pep “The Cat-Murdering Dog” was admitted to Eastern State Penitentiary on August 12, 1924.

“Prison folklore tells us that Pennsylvania Governor Gifford Pinchot used his executive powers to sentence Pep to life without parole for killing his wife’s cherished cat,” the website says, adding that prison records, including Pep being assigned his own inmate number (C-2559), support the story.

It notes that the governor had a different version of what happened — namely that he sent Pep to Eastern to act as a mascot for the prisoners. The governor, it says, was a friend of the warden, Herbert “Hard-Boiled” Smith.

A more thorough account of how Pep landed in prison can be found on the website Suite101.com.

Pep, that story explains, was a gift to Gov. Pinchot during his first gubernatorial term (1923–1927), from the nephew of his wife, Cornelia Bryce Pinchot. The nephew bred Labrador retrievers. But the gift turned out to be a destructive one. Pep developed a habit of chewing on the cushions of the front porch sofa.

“… Pinchot decided that Pep had to go, but for the sake of family harmony he did not want to end the dog’s life,” the Suite101 account says. “Fortunately, an official trip gave him the idea of a convenient way of getting the dog out of his home.

On a visit to Maine, Pinchot had seen dogs that were used as a therapy to help inmates. So when the governor got back to Pennsylvania he decided to give the troublesome Pep to Eastern State Penitentiary as a pet.”

At the time, some inmates kept pigeons and mice as pets, but not dogs. The only dogs at the prison were guard dogs, there to ensure prisoners stayed inside and in line.

But the inmates quickly developed a fondness for Pep, and apparently vice versa. Pep lived among the inmates at Eastern State for about a decade until he was transferred to newly constructed state prison called Graterford.

Two years after he was sent to Eastern, in 1926, Cornelia Bryce-Pinchot issued a statement to the New York Times in an attempt to clear Pep’s name.

Governor Pinchot’s son also maintained that there was no murder involved.

“A newspaper reporter with a sense of humor and disregard for the truth wrote that Pep had been sentenced to prison for life for killing Mrs. Pinchot’s favorite cat,” the Suite 101 article says.

The son said his father got “absolutely thousands of letters” about Pep and this sentence, according to papers at Grey Towers National Historic Site, Governor Pinchot’s home in Milford. The made-up account, along with the mugshot, was frequently reprinted in tabloids at the time.

As some have noted, Pep — innocent as he might have been — looks pretty guilty in the mugshot.

But then again, don’t we all?