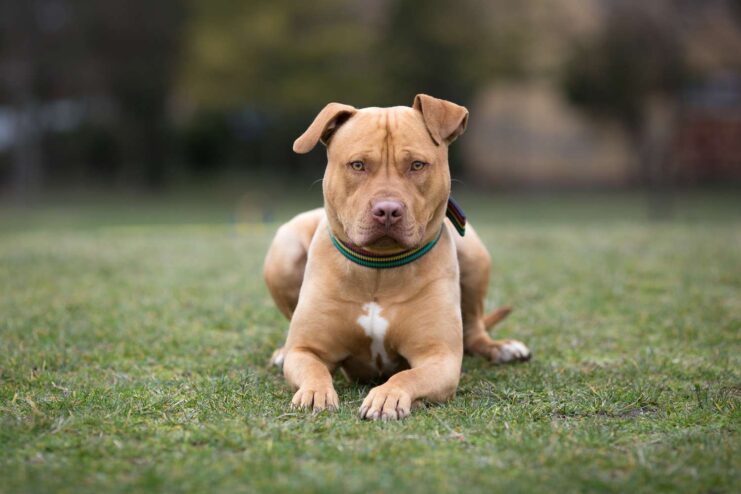 More than 1,000 pit bull lovers in Baltimore have joined in a boycott of 98 Rock after morning show co-host Mickey Cucchiella issued a call for pit bulls to be banned, kicked and executed.

Cucchiella, the abrasive and often sophomoric co-host of the morning show on WIYY (97.9 on your FM dial), made the remarks after a 7-year-old girl was attacked in Dundalk by two dogs, initially identified as pit bulls.

Later, Baltimore County issued a correction, stating the dogs were not pit bulls, but American bulldogs. Both dogs were euthanized with their owner’s consent. The girl remains hospitalized with serious facial injuries that will require multiple surgeries.

“Here’s what flips me out,” Cucchiella says in the broadcast. “A little girl’s face was eaten and you hear like ‘Oh, that’s terrible.’ Michael Vick killed these idiot dogs that were people, killers. That’s what he was doing, he was making them fight each other … The whole world’s in an outraged… ‘Look what Michael Vick did it’s horrible.’

“But one of the idiot f-in dogs that were bred to kill bites a little girl’s face and people go ‘Oh, I hope she’s ok.”

“… These stupid f-in dogs need to go …  they should be banned from everywhere, they’re dumb, vicious dogs.

“I don’t want to hear from you idiot dog owners … ‘My little Choo Choo is a great dog.’ I’m sure one member of al-Qaeda is probably a decent guy and a little misguided. That doesn’t mean you don’t want to kill al-Qaeda, because most of them are bad …

“I think any dog should be able to be airborne after you kick it.”

Later, Cucchiella insists — contrary to several studies — that pit bulls have the most powerful bite of any dog. “I can grab a border collie’s bite and pry it apart, you can’t do that with a pit bull.”

In response to a pit bull owner who called in to point out any dog can be violent, Cucchiella says, “You can raise a border collie wrong, but a border collie doesn’t have the ability to rip off a child’s face … Don’t get mad at me because you love a dog that’s a killer … Dude, they did it on Mythbusters. There are only like two or three dogs that a human can not pull apart, the other dogs’ jaws won’t dislocate and grip on.

Cucchiella and co-hosts talk about the lack of animal control officers in the city, and mention picketing at city hall — even though the incident took place in Baltimore County.

The boycott was announced on Facebook after the broadcast, and more than a thousand people joined in the cause within three days, many of them posting photos of their own pit bulls. The group calling for the boycott was started by Steven Webb Sladki, a Baltimore musician.

“I had to start this group on Monday. Of all the things, groups, and people Mickey attacks and offends, I can not sit idle and let him defame my dog. My dog can’t and wouldn’t “fight” back,” Sladki wrote in a comment to ohmidog!

Sladki, who is a member of Bmore Dog, the Baltimore Bully Crew and a volunteer at BARCS, said he chose his dog, a pit bull because they are misrepresented and misunderstood type, often judged based on appearances — something to which he can relate.

“As a heavily tattooed, musician with a scruffy beard and a shaved head, I too am often misunderstood or misrepresented. At least I have a voice to defend myself. If people only took the time to get to know me and my dog, many of their misconceptions would be cleared up instantly.”

Sladki doubted Mickey Cucchiella would be one of those people.

On his show today, Cucchiella pretty much confirmed that berating a group of pit bull supporters — Sladki included — who gathered in Canton to protest his remarks.

“He’s called people idiots, morons, and stupid in email replies,” said Michelle Ingrodi, a supporter of the boycott. “This morning, he was making fun of those of us who came out to silently protest in Canton square. He’s just an awful person, and it’s a shame he’s allowed to reach so many people.”