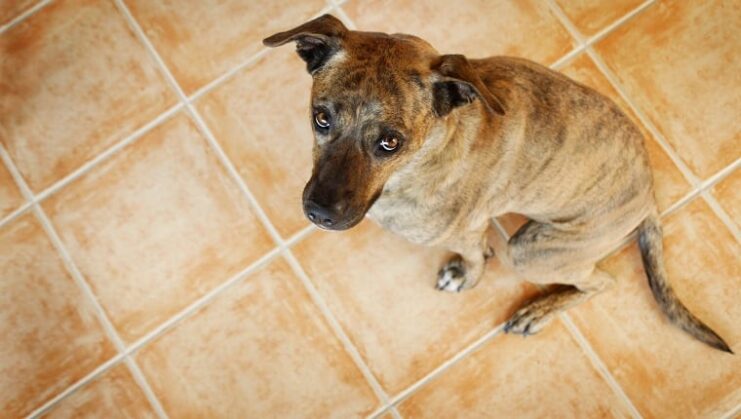 Remember Denver, the guilty, oh-so-guilty, looking yellow lab that was captured on video by her owner while she was being interrogated in the case of the missing cat treats?

We suggested — partly in jest — that she might be innocent, that appearances can be deceiving, not to mention misinterpreted, and that, just maybe, the cat did it.

Now — with the video has gone viral, with the dog and owner having appeared on ABC’s Good Morning America, with a line of “guilty dog” merchandise having been spawned — there’s more reason to believe that Denver might have been wrongly convicted. How guilty one looks and how guilty one is are two different things — especially when it comes to dogs.

And all those behaviors Denver exhibited — avoiding eye contact, lying down, rolling into a submissive position, dropping the tail, holding down the ears or head, raising a paw — are more likely triggered by the owner’s semi-scolding tones than any feelings of “remorse.”

This reminder/revelation comes from someone who knows, who did her master’s dissertation on this very topic, and who produces one of my new favorite blogs, Dog Spies.

Julie Hecht is a New York-based behavioral researcher who has worked with Patricia McConnell and Alexandra Horowitz. She wrote her dissertation at the University of Edinburg on  “Anthropomorphism and ‘guilty’ behavior in the dog,” and did her research with the Family Dog Project in Budapest, Hungary. She recently started Dog Spies, which focuses on the science behind dog behaviors and the dog-human relationship, and she divides her time between research, lecturing, blogging and working with individual pet owners.

As was my goal (plug alert) in my recently published book, “DOG, INC: The Uncanny Inside Story of Cloning Man’s Best Friend,” she attempts to take the boring out of science, thereby making it interesting and understandable. “Scientific journals should be titled, ‘Lots of great information within, a tad boring to read!’ Dog Spies translates that information and shares it with you,” reads the introduction to her blog.

Judging from her “guilty dog” blog entry — and you know it’s trustworthy because it has footnotes — Denver’s appearance, with her owners, on the ABC morning show raised her hackles a bit.

“According to the dictionary, ‘news’ is ‘information about recent events or happenings.’ I did not see any news during that morning show. Instead, I saw a bunch of morning personalities throwing out assumptions and offering audience-pleasing banter and humorous judgments about dogs. They provide no real information or ‘news’ about what happened to the cat treats.”

Here Hecht has hit on one of my pet peeves — pun definitely not intended. Rather than shedding some light, doing some research, and furthering our understanding of canines, the ABC segment — like so much of what the media, blogs included, feed us about dogs — was the kind of cutesy, substance-free fluff that reinforces misinformation and misunderstanding.

Like most everyone else, the smiling morning show hosts concluded Denver must have eaten the cat treats. When shown the empty bag and asked, “Did you do this?” Denver displays squinting eyes, averts her head and makes a highly laughable presentation of her teeth.

Hecht cites a 2008 research paper that says 74 percent of dog owners attribute guilt to dogs and believe dogs know when they have done something owners disapprove of. But scientific research shows that it’s not knowledge of a misdeed, or remorse, that leads to the guilty look, but an owner’s scolding. (See the New York Times piece, “It’s an Owner’s Scolding That Makes a ‘Guilty’ Dog.”)

Or, see this — a video Hecht made that shows a dog named Gidget being falsely accused:

As Alexandra Horowitz, author of “Inside of a Dog,” once put it: “We’ve trained them that when they see us angry, they give us that guilty look. I’m not saying they don’t feel guilt … I can’t test that yet. But we generate the context that prompts them to produce this look.

Why then, in the guilty dog video gone viral, does Denver show these behaviors when the other, presumed innocent family dog, Masey, does not?

“Research finds that even post-transgression, not all dogs show the ‘guilty look’ in the presence of a non-scolding owner,” Hecht says. And, transgressions aside, it might be the simple fact that Denver is a more expressively submissive dog, according to Hecht, who says part two of her entry on the “guilty dog look” will be appearing soon on her blog.

Why do dogs show what appears to be a guilty look more so than do their progenitors, wolves?

“Dogs have, for the most part, incredibly malleable and expressive faces (much more so than, say, cats) and from this, we can often see the subtleties of their eyebrows going down or up or their wide forward-facing eyes, becoming wider. All of these things could impact how humans attribute mental states to dogs,” Hecht told me.

My theory is there’s more at play — though maybe I’m giving dogs more intellectual credit than they deserve. I think mastering the guilty look is another way dogs have evolved since their domestication, and to cope with their domestication — part of their ongoing adaption to pethood. By showing submission, some of them may have figured out, they can keep the peace, and maybe even get a belly rub or a Milkbone.

To me, the even more interesting question, when it comes to “the guilty look,” is whether, even before the scolding comes, dogs can sense it’s about to. Before a word comes out of the owner’s mouth, before an angry stance is even taken, can dogs sense that some displeasure is churning within us?

I, without any research or footnotes to back me, believe so. My scientific explanation for this: It’s magic.

Dogs are figuring us out. Which, until recent years, is maybe more than they could say about us. We’ve always been more concerned with their brawn than their brain, more concerned with their beauty than their behavior. It’s man’s hand that has led to the vast diversity of shapes and sizes in dogs. And while breeders have begun to put a higher priority on temperament, it can still be argued that appearance is placed above all else.

Could it be, in their way — without the aid of microscopes, opposable thumbs or access to our pedigrees — dogs are looking more deeply into us than we are into them? Could it be, during their time in domestication, dogs, as a species, have amassed a wealth of knowledge on how to best get along with humans, and have become even better at doing so than humans?

I think there’s more at work than breeding and genetics and instinct when it comes to dog behavior. An ongoing and not fully understood evolution is at play in the dog-human relationship. And that is the reason — all those unanswered questions about behavior, coupled with those we wrongly assume we know the answers to —  why dog blogs of substance, like Hecht’s, are important.

At the same time, though, I rue the day when our understanding of dog behavior is complete — when we can explain every act of a dog as stemming from some lingering instinct, or adaptation to their domestication. For then the magic will be gone.

I want all three — my science, my magic and my dog. Does that make me greedy?