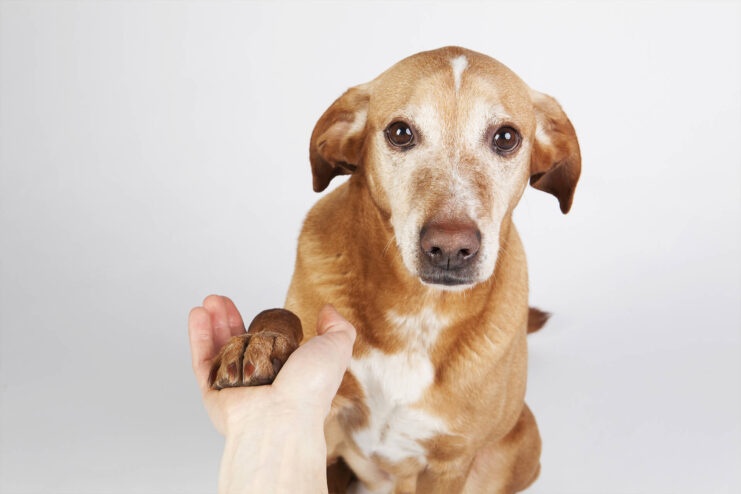 It was the sort of scene I can’t walk past A muttly looking dog, a white-bearded homeless guy and a handmade cardboard sign offering: “Dog Tricks 1$.”

On the sidewalk along Franklin Street — the main drag in Chapel Hill — Mark Williams, after offering me some room on his bench, said he and his dog, Two Beans, have been homeless for about a year. “Work’s kind of slow now” in the construction /handyman/odd jobs field, he explained.

The dog trick — Two Beans knows only one — helps rake in enough money for meals.

I’d gone to Chapel Hill for a meeting of the Board of Advisers of the University of North Carolina’s School of Journalism and Mass Communication, an esteemed panel on which I still serve, despite having left my most recent newspaper job a year ago, and despite – other than doing some revisions on the book I left the business to write, and writing this website — being unemployed.

Twice a year at UNC, members of the board gather to hear what the school is up to in terms of research, fund-raising and curriculum changes, which are coming pretty fast and furious nowadays as the industry, facing declining profits, continues to try to pull new tricks out of its hat, or in some cases get a whole new hat.

This meeting was a special one because it’s the journalism school’s 100 birthday — a benchmark the university’s basketball program also hit this year. That’s pretty old, but there are older journalism schools, I learned during the festivities, such as the highly respected one at the University of Missouri, which was the nation’s first.

Getting ready to pick up my dog Ace (who I’d dropped off for a bath during the meeting) and leave town, I was walking down Franklin Street. Doing that always triggers memories of my days as a student. Thirty-four years ago, I was getting ready to graduate with my degree in journalism, and I was sending job applications to newspapers across the country. I used the seventy-some rejection letters I got then to wallpaper my room.

It dawned on me that, today, I’m in sort of the same situation – job hunting, getting a few rejections, and much more often getting no response at all. At least in the good old days, they sent you a form letter. Today, many companies often don’t even bother to acknowledge receipt of your application. While students are still finding jobs, the journalism job market — like journalism — seems tighter, shallower and meaner than ever.

So bleak, in fact, that when I saw Mark Williams’ sign, I ever so briefly considered getting my own piece of cardboard, picking up my dog and setting up shop on the next bench down, offering higher-priced, upscale dog tricks (the Starbucks approach) for $5 to cover gas for my trip home.

Two Beans’ trick requires a dollar bill. Having only $10, I asked Williams if that would work. He pocketed the ten-dollar bill and pulled from his other pocket a crumpled one-dollar bill. “Now go back in that alley and hide it somewhere, and Two Beans will find it.”

I wedged the bill behind a drainpipe, about waist high, and sure enough, Two Beans, when I called, came around the corner sniffed around, pulled it out, and brought it dutifully to his master.

Williams got the dog from a friend, shortly before he began a stretch of life on the streets. He named him Two Beans, he said, because the dog — a golden retriever-Rhodesian ridgeback mix, he suspects — is not neutered. Williams said police don’t give him any trouble about his street business. “They’d rather me do this than just be panhandling like these other guys,” he said.

In addition to providing some income — as much as $70 a day when there’s a home football game – Two Beans makes life on the streets “a little less miserable,” Williams said. He said teaching Two Beans the trick cost him $3 because the dog ate the first three dollar bills

As we sat and talked, Williams, originally from Greenville, N.C., revealed that he once wrote a book about dog training. It was only 20 pages and, so it wouldn’t cost him much to mail it out, weighed only an ounce. “It was basically plagiarized, and not very good.” He took out an ad in the National Enquirer, offering the mini-book for sale for $3.  He says he only sold two copies, one to a customer in Virginia Beach, another to a customer in Acapulco — making him, he joked, an “international author.”

When he learned I was a former newspaper reporter, Williams revealed that his family was in journalism as well: His grandfather, Walter Williams, founded the journalism school at the University of Missouri.

Coincidentally, I’d also recently applied for a job there, in my continuing quest to sniff out writing/teaching/multi-media positions. I received an emailed rejection, one of at least a dozen so far.

I don’t print out my emailed rejections. They don’t have the cool logos on them that I once found decorative enough to serve as wall art. I think I also take them a little more personally, now that I have experience and credentials. So I won’t be using them as wallpaper — either the kind you put on your wall or the kind on your computer.

Instead, I’ll keep plugging along, like Williams, and waiting for the better times I keep hearing are ahead.

Until then … dog trick, anyone?