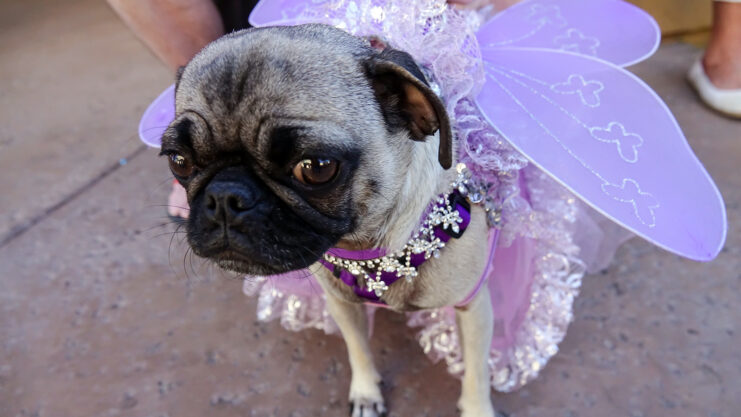 Attention all you “dog shamers,” all you dog dresser-uppers, all you dog-dyers, and anyone else who finds it fun and harmless to put your dog in a costume, use him to make a fashion statement, or ridicule him on social media.

You may be making him feel silly, and damaging his self-esteem.

The Telegraph reports that animal charities in the UK are calling upon pet owners to cool it when it comes to decorating their dogs.

Among those quoted in the story was Caroline Kisko, the Kennel Club’s Secretary, who said the organization is “not greatly in favor of doing anything to dogs which makes them feel ‘silly.’ Dogs know when they are being laughed at.”

Not exactly a bold stance there — “not greatly in favor?” — but then again the Kennel Club sponsors Crufts, which in 2009 chose this poodle as the winner in the Utility Group:

Apparently shaving a dog to resemble a bunch of poofy cotton balls is an accepted exemption from the “let’s not make dogs feel silly” rule.

Hypocrisy and poodle cuts aside, we think Kisco makes a valid point when she says dog owners need to strike a balance between what is done for the dog and what is mere “human vanity.”

“It is not a toy and we need to maintain that a dog is a dog,” she said. “Since we can’t ask them we should err on the side of caution … Why is it suddenly OK to dress a dog up in silly clothing or dye it?”

The answer is social media, which has made such practices, if not more frequent, at least more noticeable.

Decorating dogs is nothing new. I’d guess even ancient Egyptians did it — because it sounds like something right up their alley. But since Facebook and other social media came along, it has brought out the attention-seeker in all of us, to the point that — even if it’s not Halloween — we’ll post photos of our dogs looking silly or doing something silly. 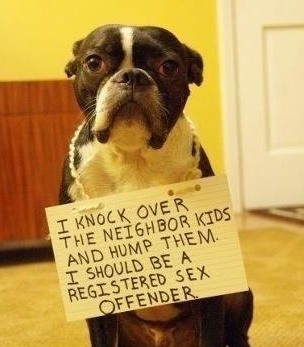 That’s not always “mocking” or “ridiculing” them, but often, particularly with the dog-shaming sites, it comes pretty close.

I’ve long had a problem with people dressing dogs for any purpose other than protection against the elements. I draw the line at bandanas, which my former dog almost always wore, and loved. My current dog, Jinjja, won’t let a bandana anywhere near his neck.

Some dogs tolerate getting adorned, receiving dye jobs, and funny haircuts; some don’t. But, as Kisco points out, even a dog who doesn’t visibly object may still be getting humiliated.

“Some will have a reasonably high level of tolerance for that sort of thing. You can get a dog that will love being the center of attention. But some will feel silly. Outfits come under the same banner – whether it’s a silly collar or whatever.

“If someone wants to put a bumblebee costume on their dog for Christmas, that’s fine, but take it off again. The dog doesn’t want to be a bumblebee …”

Paula Boyden, veterinary director at Dogs Trust, told The Telegraph that she had a problem with grooming techniques and dyes that could cause discomfort or irritation.

“It’s important that dog owners, and groomers, remember that dogs are not fashion accessories to have the latest trend tried out on them, grooming is for the dog’s needs rather than for the owner’s entertainment,” she said.

And Elisa Allen, a director at PETA in the UK, is quoted in the article as saying, “Dogs aren’t bonsai trees to be sculpted into shapes that please us. Many are nervous about being groomed, and dyeing them bright colors puts them at risk for allergic reactions and even toxic poisoning, which can have serious and even fatal consequences.”

Before you start thinking those groups have peacefully united to pursue this cause, keep in mind that the only place they seem to have come together is in the Telegraph article, and that — if there is any newsworthiness here — it’s that there is something all three groups agree on.

PETA regularly crashes Crufts, and the Dogs Trust has blamed the Kennel Club and Crufts for promulgating breed standards that don’t just make dogs look silly, but makes them unhealthy as well.

The article may make it sound as if the groups are harmoniously working hand in hand, but that’s about as likely as a bulldog doing ballet.