Why would anyone want to take an animal that is always so joyously in the moment — in the natural moment — and immerse it in an artificial, non-tactile, monotonously repetitious, pixelated, and quite possibly addicting world where time passes in a blur?

To take the house pet perhaps best known for being able to make a game out of anything — string, toilet paper roll, dust bunny — and put a $200 iPad in front of it so it can paw at virtual fish? That just strikes me as wrong.

It might be fun for you to watch the first time, and it might even be amusing for the feline for a while. 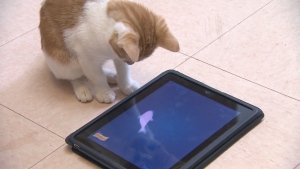 But then it becomes more obsession than play, and your feline, once a wildly imaginative beast with an admirable knack for making anything fun, is stalking the room, zombie-like, Jonesing for his iPad.

Then, when you try to take their iPads away, they become evil tantrum-throwing monsters who no longer see joy, mystery, and adventure in something as mundane as a cardboard box or paper bag.

Sure, it is all starting out innocently enough. Remember, though, we humans started with Pong before progressing to virtual murder and mayhem. If history is any indication cat computer play will progress into darker realms — to the point where cats are tuning the real world out and, albeit virtually, engaging in pretend sex and violence, car theft even, on their computers.

Am I exaggerating to ridiculous proportions? Clearly. But seriously, taking the long view, is this best for cats?

Or will we, with all good intentions, slowly drive them insane?

How long, for example, can you watch this before feeling a certain panic in your soul?

Video games for cats have been catching on for several years now — to the point that even some animal shelters have turned to them.

The Regina Humane Society in Canada turned to iPads last year to keep their resident cats occupied and engaged.

“This is just another way, another tool in our toolbox that allows us to keep our animals healthy and happy while they’re awaiting their special someone who’s going to take them home forever,” said Lisa Koch, executive director.

“Owned cats around the world have apps that they play with on their owners [iPads], and it’s something that we’ve adopted here at the Humane Society for cats who don’t have families to make the environment that they’re living in more stimulating for them mentally.”

Koch said these programs are meant to keep cats active and stimulate them mentally.

Stimulate? Maybe. But does laying down and pawing a mouse on a $200 screen keep a cat more active than batting an actual $1.29 play mouse around the room and chasing it?

Lost, too, if we let cats live their nine lives in the virtual world, is interaction with humans. High-tech pet toys that bill themselves as “interactive” have a way of removing a human’s resolve to spend one-on-one time with their pet, to the point where they no longer feel much need to do so. It’s like setting a child in front of the TV set for three hours.

The Regina Humane Society does good and noble work, and maybe in a shelter situation, where it’s challenging to keep all the animals occupied, something like this is acceptable.

On the other hand, cats are already the ultimate game inventors. We should be pinpointing what is in them — a play gene. — that makes them so able to look at a spool of thread, a pencil, a puzzle piece, and see an amusement park.

Instead, we appear headed to making them as addicted to the computer screen as we are?