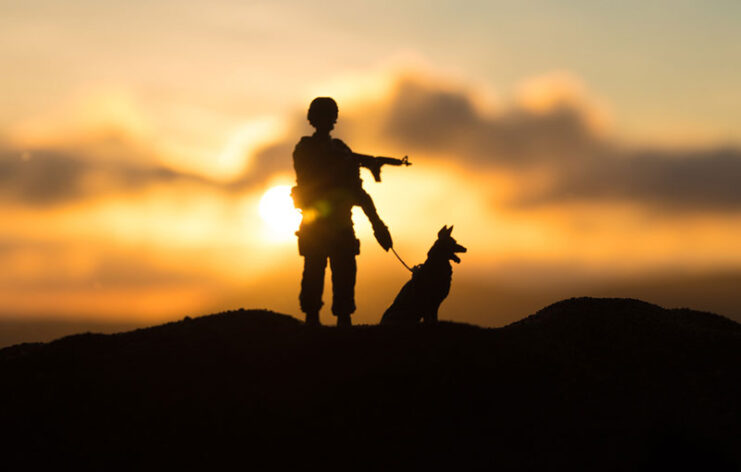 When U.S. Marine Cpl. Dustin Lee was cut down by a rocket-propelled grenade in Iraq’s Anbar province, his partner was hit by shrapnel too, but still managed to crawl over to Lee and lay on top of him, protecting him until medics arrived.

Lee, who hadn’t yet turned 21 and was three months from finishing his tour, didn’t survive. But his partner did. He came back home for medical treatment, attended Lee’s funeral, got awarded a Commemorative Purple Heart  and — though still carrying shrapnel — was assigned to complete his tour of duty.

That’s when Lee’s family intervened and, with help from a Congressman, persuaded the Marines to let Lee’s partner — a bomb-sniffing German shepherd named Lex — take early retirement and come live with them.

Lee’s parents, Jerome and Rachel Lee, and his teenage brother and sister, thought that adopting the dog that survived the attack would help fill the void left by their son’s death. They had previously adopted another of their son’s military working dogs after the animal started going blind and had to retire.

Lee and Lex, who were renowned for their abilities to detect and clear roadside bombs, shared a deep bond, his family says — as evidenced Lex’s behavior when they were under attack.

“He was still protecting him until the end,” said Lee’s mother. “Lex was bleeding. Dustin was bleeding. “Their blood combined. They were already brothers and partners. They just became one.”

But bringing the dog home turned into a giant challenge. The military bureaucracy was sticking to its rules. Because Lex had been declared healthy enough to return to duty, military regulations prevented the family from adopting Lex for at least two years. For eight months, the Lees’ requests to adopt Lex were denied.

John Burnam, the founder of the planned national war dogs monument, helped the cause as well, writing a  moving account of the attack from Lex’s point of view. (You can learn more about the monument and make donations on his military working dogs website.)

Jones sent the story to Brig. Gen. Mike Regner, the Marine congressional liaison, who pled the Lees’ case to his superiors. A few weeks later, Lex was released from duty and headed home to the Lee house in Quitman, Miss.

Jones was given an award by the Humane Society of the United States this week for helping to facilitate the adoption, and the Lees and Lex attended the emotional ceremony, according to a Media General News Service report.

Before the ceremony, the Lees met with Jones in his congressional office. A picture of Lex staring at Dustin’s grave hangs on one wall, alongside stories and pic­tures of other fallen Marines.

Lex, 8, has lived with the Lees for slightly more than a year. In 2008, he was named the American Kennel Club’s Law Enforcement Dog of the Year. Though he has shrapnel in his back that doctors couldn’t remove, he is healthy and doing OK, said Lee’s father.

“From day one, Lex came in … like he always belonged there,” he said.