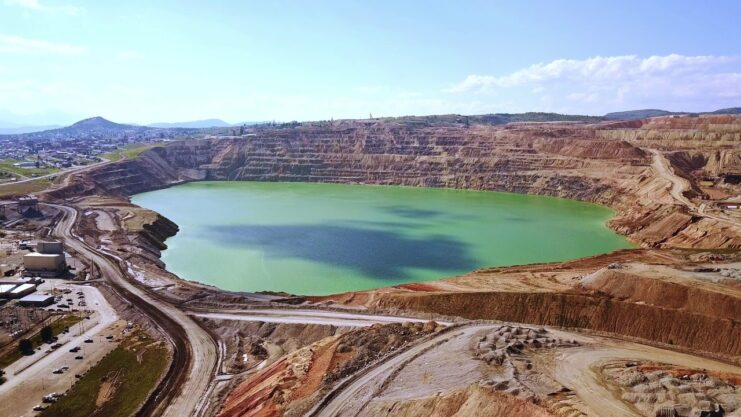 Once upon a time in Butte, in a huge and barren expanse of waste that’s part of the nation’s largest Superfund site, there lived a dog.

Nobody knows how he got there, why he stayed, or how he managed to remain alive in the toxic confines of what’s known as the Berkeley Pit. But live he did, for 17 years — during times of active mining, during its suspension, during its limited restart, during the ongoing clean-up effort and right up until the pit transitioned into one of the country’s oddest tourist attractions.

He just showed up, back in 1986. Once miners figured out that the ghostly white image in the distance was a dog, they named him “The Auditor,” because of his tendency to appear when he was least expected.

With matted ropes of white hair covering his legs, The Auditor — a Puli — sometimes appeared to be hovering when he moved, and he seemed to want nothing to do with humans. The miners would leave him food, and build him a house, and even started sticking baby aspirin in his food when they noticed he was limping, but The Auditor was mostly unapproachable up until the end.

He died peacefully in his dog house in 2003, but The Auditor — like mining — would leave a legacy. His name would live on — in statues, in science, and as a symbol for, well, lots of things.

Appropriately enough, for a mining site in the midst of a massive EPA clean-up that will continue for generations, The Auditor had a coat like a mop.

His yellowing dreadlocks covered his eyes, too, limiting his vision — similar to the blind eye Montana once turned to the environmental havoc mining would wreak on and beneath its landscape.

But perhaps more than anything else, the mysterious white dog became a metaphor for Butte, and its ability to survive hard times — of the hardy stuff of which Montanans are made.

Butte’s still kicking — though not the way it once kicked. It’s about a third of the size it was in its heyday.  Once called the “Richest Hill on Earth” for its massive copper deposits, Butte in the early 1900s, boasted a population of 100,000.

When the mines shut down by 1982, Butte was left economically crippled and environmentally contaminated. Piles of mine waste and years of smoke from smelters contaminated the land and water around Butte with arsenic, mercury, lead and other metals.

In the 1980s, the Berkeley Pit and Butte’s historic Uptown District have declared a Superfund site — one that extends 130 miles downstream due to tailings that settled along the Clark Fork River.

The Auditor lingers too. After the local newspaper brought him to the public’s attention in 2003, a campaign began to honor him with a series of statues, three of which now sit in various locations around town, honoring him not for any heroics, but solely for staying alive in a place where not much does.

Berkeley Pit lies just a few blocks from the center of Butte. It stretches a mile-and-a-half across and is almost 2,000 feet deep. Barren soil surrounds a lake laden with heavy metals. In 1995, a flock of migrating geese landed in the water. The next morning 342 were found dead.

How The Auditor managed to survive all that time is as mysterious as the dog himself. Maybe his rope-like locks, instead of soaking in the toxins, kept them from reaching his skin. Maybe the toxins weren’t as toxic as thought. Maybe, as dogs do, he adapted to them. The only company still in operation at the site — after mourning his loss — had The Auditor cremated.

Normally, that would slam the door shut on the mystery — but Holly Peterson already had her foot in it.

Peterson, an environmental engineer at Montana Tech in Butte, saw the article about The Auditor — 16 years old by then — in 2003. It tugged at her heartstrings as well as her scientific curiosity.

“How can that not touch you?” she said over the weekend, sitting in her office, which is decorated with photos of The Auditor. “I kept wondering, how can that thing survive? With all the contamination in Butte, I started thinking, how can we study that in a different way?”

With her students, she began getting samples of hair from dogs in Butte and the surrounding areas, and when she ran into an official from the mining company, Montana Resources, at a presentation, she asked about getting a sample from The Auditor.

The Auditor was first seen roaming the mine in 1986, the year Montana Resources started its operations. The company, due to plunging copper prices, shut down operations there in 2000, leaving only a skelton crew, but reopened in 2003.

After getting permission from the company, Peterson went to the site, where a mining company employee, wearing gloves, approached The Auditor, on his last legs by then, and snipped off a few locks of hair.

“You could tell he just wanted us to leave him alone,” Peterson said.

Tests on the sample in July of 2003 revealed “elevated levels of almost every element imaginable,” Peterson said, including 128 times the amount of arsenic in a typical dog’s hair.

Peterson’s research project would expand from there, shedding new light on the extent of environmental degradation in Butte and introducing a new, if not conclusive, way to measure it and the continuing efforts to clean it up. Her work marked the first time pet hair has been used to monitor toxins in a residential Superfund site.

Since then, the project has moved on to testing the hair of animals in Australia and Nairobi, and sampling the hair of animals bagged by hunters back home in Montana. Through taking samples at hunter check stations, they found far higher levels of metals in animals shot in the area around Anaconda, once home to a huge smelting operation.

The Auditor, as it turned out, inspired Peterson on several levels. She was the one behind the effort to install statues of him — created by a Texas sculptor — at several locations around town, including the one she showed me at the Butte Plaza Mall.

It’s made of bronze, with a copper patina that has worn off in spots from people petting it. Most of the funding for the sculpture came from a California couple, who read of The Auditor in a Puli Club of America newsletter.

Peterson’s hope was that The Auditor — after his death on Nov. 19, 2003 —  would become a mascot for Butte, or a mascot for environmental causes, that his legacy would serve as inspiration to others, and as a reminder to not abandon pets, or abuse the planet.

What she wasn’t planning on was her own little Auditor.

Living with her 86-year-old mother, she didn’t see a dog fitting into her life.

But after publicity about The Auditor, and connecting with the Puli Club, she started getting emails when a Puli would show up at a shelter in need of rescue.

That’s how, three years ago, she ended up with Birke-Beiner.

“I couldn’t pass him up when I saw the picture of him,” Peterson said.

Birke-Beiner, who earlier in the day had gone to a Halloween Party — as a basket of yarn — came along on our trip to the mall, much of which he spent draped over Peterson’s shoulder, looking something like a Lady Gaga fashion accessory.

Peterson says some people call him Little Auditor, but Birke is his own dog — playful, people-friendly and, one gets the impression, destined to live a happy and non-toxic life, far away from a giant hole in the ground known as the Berkeley Pit.