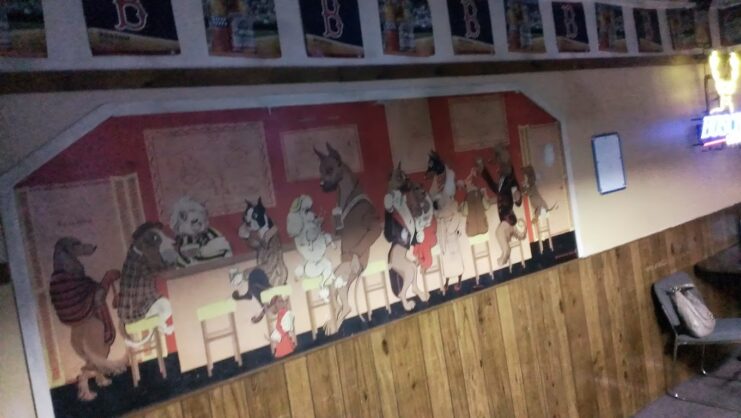 There’s an old school bar in Bangor, Maine, that has a dog mural on a wall that many have wondered about for decades, including the bar’s owners.

Where did the original version of it come from? They didn’t know. Why leave such a retro monstrosity on the wall? Because they love it.

The ten-foot mural features 12 dogs of various sizes and breeds, all dressed liked humans and standing around the bar. There’s a high-falutin’ cocker spaniel, a basset hound in a plaid sport coat, a professorial Boston terrier, a boxer elegantly attired in tails, and a Great Dane who appears to be hitting on the poodle on the stool next to him.

Jimmy Puiia, owner of the New Waverly, knew very little about the mural — except that he bought it at the old Sherwin-Williams on Central Street back in 1975, as a heavy piece of custom wallpaper to be installed on the wall.

That’s where it has been for 42 years, the Bangor Daily News reported last week. (The website will make non-subscribers answer a couple to get access to the story, but it’s worth the effort.)

Only three years ago did the family that owns the New Waverly — known among locals as “The Wave” — learn about the significance of their mural.

Members of the Sohns family — many of them regulars at the New Waverly — were attending the NY Now Gift Fair in New York City in the summer of 2014, perusing the offerings of thousands of vendors, when they stumbled across what appeared to be some of those very same dogs.

“There was this giant cut out of the Great Dane (from the mural) right in the middle of the booth, and we all just kind of went ‘Holy crap! It’s the Wave dogs!,’” Amanda Sohns said.

The booth, as it turned out, was run by Amanda Coleman Voss, daughter of the original artist, Constance Depler Coleman, now 91 years old.

Depler Coleman is a pet portrait artist behind a series of works showing dogs in various human-type social setting, most of them created in the 1950s and 1960s. (But no, she’s not the artist behind the poker playing dogs.)

By the 1970s, bars across the country featured her work as part of their decor — printed on wallpaper murals. There were the Bar Hounds, the Hep Hounds, the Western Hounds and more, and they’d almost all end up the victim of upscaling and gentrification by the 2000s.

“People redecorate bars. They update them,” Sohns said. “But not the Wave. It’s a time capsule.”

Sohns said she was told at the gift show that only about four of the murals remain displayed across the country.

“But there’s five, including the Wave,” she said. The Sohns family own the Rock & Art Shops in Bangor, Bar Harbor and Ellsworth.

Depler Coleman went on to more fame though, painting pet portraits for the rich and famous, including former President George W. Bush, and Oprah Winfrey.

In 2012, her daughter, Amanda Coleman Voss, started a business printing her mother’s retro art on items including glassware, posters, tote bags, and more.

The website OriginalDepler reports that Depler is still “creating, traveling, painting and enjoying cocktails with her friends.”

At the New Waverly, a restaurant and bar that has been named one of the best dive bars in Maine, Puiia said the mural serves as a conversation-starter. Patrons like to decide which dog in the mural best represents their persona.

“I think people like to figure out which one they are, and which one other people are,” Puiia said. “People like to talk about it. It’s just been here for so long. It’s definitely a part of the bar.”

And, based on their recently-found knowledge, it’s even more worth preserving. “Who knew?” Jimmy Puiia, Anthony’s son, said. “Now I think we want to preserve it. Maybe put it behind plexiglass. I never knew it was so rare.”