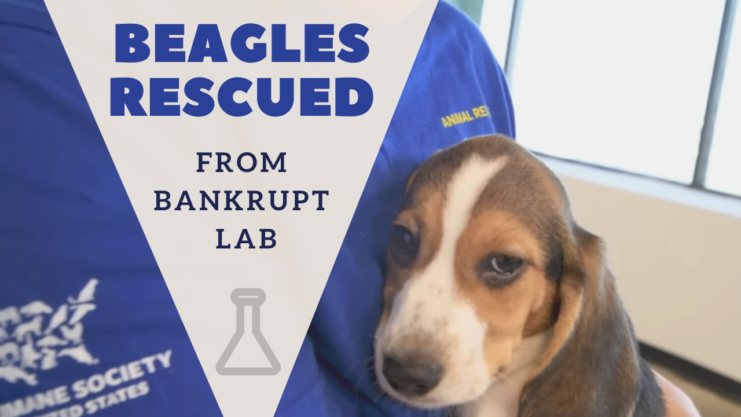 One hundred and twenty beagles who faced lifetimes being used in medical research experiments have been freed — just in time for the Fourth of July weekend.

On Friday, the beagles — owned by a research facility in New Jersey whose parent pharmaceutical company went into bankruptcy — were released to the care of animal rescue groups that, after socializing them, hope to adopt them out as family pets.

Beagles are bred especially for use in medical experiments and are used in research because of their affable and passive natures, their relative lack of inherited health problems, and their mid-range size. These particular beagles are estimated to be between two and five years of age and have lived their entire lives in a laboratory.

Best Friends Animal Society headquartered in Kanab, Utah, and Pets Alive Animal Sanctuary, based in Middletown, N.Y., and Elmsford, N.Y., worked together on rescuing the beagles, who had been left locked in the facility operated by Aniclin Preclinical Services in Warren County, N.J.

The facility closed in April after Aniclin’s parent pharmaceutical company couldn’t pay its bills, according to the Times Herald-Record in New York’s Hudson Valley.

Pets Alive Animal Sanctuary welcomed the beagles to their new home this weekend, decorated in red, white, and blue.

Best Friends, according to a press release, was made aware of the beagles’ dilemma through its Community Animal Assistance national helpline, which fields requests to help animals from around the country. Best Friends contacted Pets Alive, a sanctuary in the Lower Hudson Valley region of New York, which offered to take ownership of the dogs. Several other animal rescue organizations have stepped forward, each offering to take some of the beagles.

Best Friends is paying for veterinary care, food, and transportation of the dogs from the facility. It will be bringing back as many as 30 dogs to its sanctuary in Utah, including those who may need more time and help before transitioning into family living.

There are awful animal cruelty cases happening in the world, we discuss one of those in our post about a man throwing a dog off a bridge in Lithuania.

“Best Friends is teaming up with Pets Alive in the New York area to help these beagles get the fresh start they deserve … one that’s long overdue,” said Judah Battista of Best Friends Animal Society.

“In this case, the cruel and unnecessary practice of animal testing was compounded by the abandonment of these innocent victims,” said Kerry Clair, executive co-director of Pets Alive Animal Sanctuary.