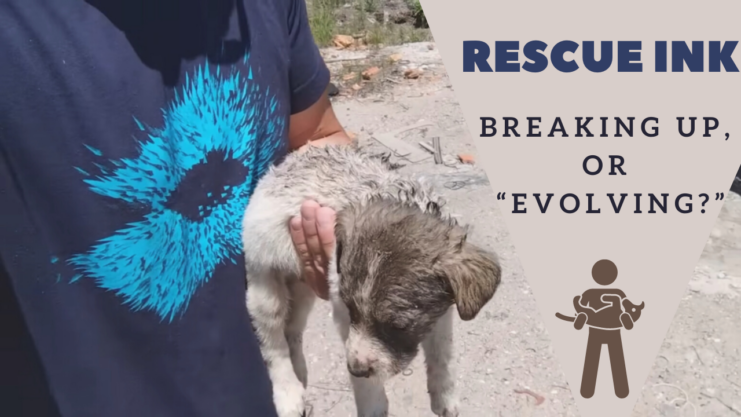 As fearless, outspoken, and in-your-face as they portray themselves, you’d think the gang at Rescue Ink would be a little more forthcoming about whatever it is that is going on within the organization, where, by some accounts, nearly half of the members — representing God only knows how many tattoos — have pulled out.

Instead, other than a vaguely worded official statement, they’ve left it up to their fans to figure out just who has left, and why.

Despite the continuing success of their National Geographic Channel TV show, and a recently released book, there are reports — mostly on Facebook — that four members have left the organization and the TV show, pretty much in unison, to pursue other interests.

The only official confirmation I could find was a statement by Rescue Ink member Mary Fayet posted on the group’s Facebook page Joe Panz:

“Rescue Ink is an ever-evolving animal rescue organization dedicated to battling animal abuse and neglect and assisting other animal-welfare agencies and shelters to do the same. With much regret, we announce that some participants of Rescue Ink have chosen to depart the organization and as such we wish these departing members the best of luck in their future endeavors and thank them for their countless hours of dedication promoting the mission of Rescue Ink.

“Please be assured, however, that Rescue Ink, thanks to our founding members, countless dedicated recruits, and volunteers’ remains stronger than ever and will continue to promote the Rescue Ink mission.”

The statement doesn’t say who has left. But, from what I can gather from the Facebook pages of Rescue Ink’s original members at least four – Eric, Angel, Robert, and Batso — have departed.

Batso Maccharoli reports on his Facebook page: “THE INK OF RESCUE INK, THE ELDEST AND ORIGINAL MEMBER BATSO, HAS FLOWN THE COOP. I have decided to no longer be affiliated with Rescue Ink. I will continue to keep balance and harmony in my life by doing what I love most – helping.”

Check out our other posts about animal cruelty.