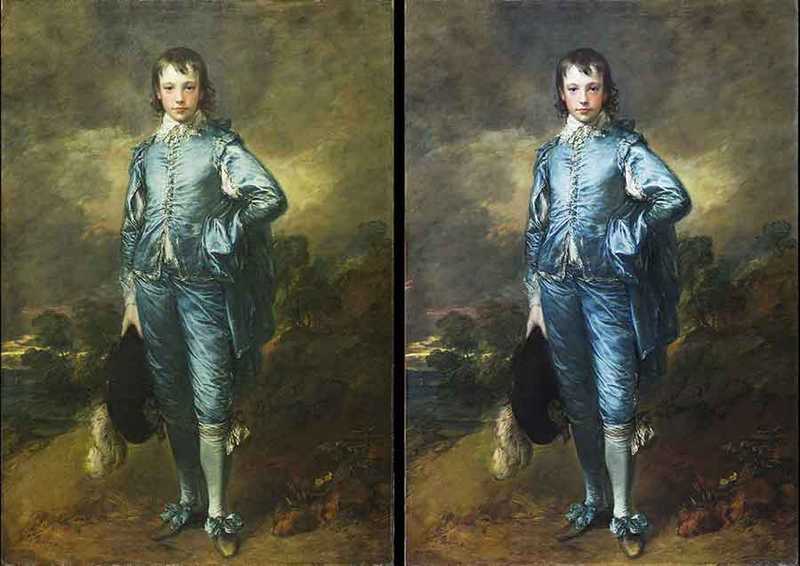 “The Blue Boy,” artist Thomas Gainsborough’s most famous work, featured a dog at one point in its evolution, and come September you’ll have a chance to see its ghostly image in person.

At some point in its creation, “The Blue Boy” lost his dog. Gainsborough painted over the fluffy white dog in the painting’s lower right hand corner, covering it with a pile of rocks.

Not until 1994, when an X-ray revealed the dog sitting by his master’s feet, did that become known to the world.

The painting’s ongoing restoration at The Huntington Library in California is now becoming an exhibit in itself, featuring a look at the painting’s history, mysteries, and artistic virtues, the revelations X-rays have provided over the years and explanations of the techniques being used to restore the work.

Project Blue Boy will open Sept. 22 at the Huntington, where the original painting has resided since 1921

Of course, the boy’s blueness had nothing to do with any feelings of melancholy; instead the painting depicts a young man who appears confident, proud of his station in life and maybe a little bit defiant, as if prepared to defend himself against any teasing about his frilly blue outfit and plumed hat.

The painting isn’t as vibrant as it once once, and that’s why the museum has undertaken the restoration project.

“Earlier conservation treatments have involved adding new layers of varnish as temporary solutions to keep it on view as much as possible,” said senior paintings conservator and “Project Blue Boy” co-curator Christina O’Connell.

“The original colors now appear hazy and dull and many of the details are obscured,” she added.

In addition to contributing to restoration research, the project will likely uncover new information of interest to art historians. O’Connell is using a Haag-Streit surgical microscope to closely examine the painting. To gather material information, she is employing imaging techniques including digital x-radiography, infrared reflectography, ultraviolet fluorescence, and x-ray fluorescence.

The restoration project has also uncovered an An L-shaped tear more than 11-inches long, which is believed to have dated back to the 19th century when the painting was in the collection of the Duke of Westminster.

The painting was sold in 1921 to railroad tycoon Henry Edwards Huntington, leading to an outcry among the English, who were horrified that “The Blue Boy” should leave his homeland. The sales price is believed to have been about $700,000, or about $9.3 million today, which made it the second most expensive painting in the world, behind Leonardo da Vinci’s Madonna and Child.

In 1939, an X-ray was taken of the painting that revealed the canvas had once been an incomplete painting of an older man. The dog didn’t appear in that X-Ray.

Many believe the painting pictured ironmonger Jonathan Buttall, the first owner of the painting, but the true identity of the model remains a mystery.

No one knows why Gainsborough decided to rid the painting of the dog, either.

O’Connell will continue her examination and analysis of “The Blue Boy,” and her efforts to restore it.

Visitors to the Huntington will be able to observe her at work in the Thornton Portrait Gallery on Thursdays, Fridays and select Sundays from Sept. 22 through January 2019, PasadenaNow.com reported.

The painting will get a final treatment and reframing after that and will be rehung in its former location in the Huntington’s portrait gallery in early 2020.